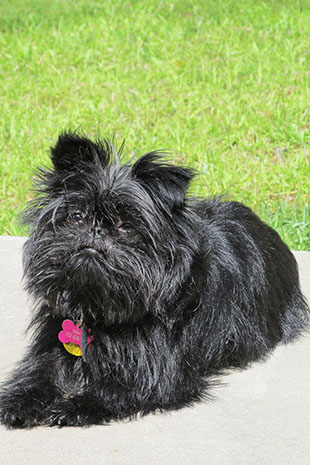 The Affenpinscher originated in Germany and its name can be translated into English as “monkey terrier”. In France it is described as the “little devil with a moustache”. It is now quite a rare breed. The American Kennel Club classify it in the toy group and rank it 149 out of 193 in breed popularity.

They were originally bred to hunt mice and rats so may not be the ideal dog for households that also have hamsters or Guinea pigs as pets.

Origins Of The Affenpinscher

There were many similar breeds of dog throughout Europe which were used for catching rats and mice in barns and granaries.

The Affenpinscher, which was bred in Germany was originally bigger than the modern dog.

Later, they were bred to be smaller and evolved from a rat-catcher into a companion dog.

Their first entry into the American Kennel Club stud book was in 1936.

The Affenpinscher Is a small dog between 9.5 and 11.5 inches tall and weighing between 7 and 9 pounds.

It has a hard, rough coat which grows longer over their shoulders and head giving it a mane. If the hair is clipped it can become softer and fluffier.

The most common coat color is black, but it can also be silver, red, black or tan.

It is considered to be one of the dog breeds which shed the least.

The Affenpinscher is independent minded and needs firm, constant training. They can be difficult to house break. They become bored quite easily and the training should be varied to keep them interested.

They enjoy being part of a human family and become loyal companions. They will often consider themselves to be the boss of the family.

Affenpinschers can become protective of their food and toys. They are not recommended for homes with very small children.

They show no fear even when faced with much larger dogs.

The average life span of an Affenpinscher is a little over 11 years, which is slightly less than other breeds their size.

They are generally healthy dogs with few genetic problems. They are a shorter-faced dog and can experience breathing problems particularly in warmer weather.

They are subject to some of the health conditions faced by all smaller dogs and the National Breed Club recommends that you organise an ophthalmologist’s evaluation and patella evaluation before purchase.

The Affenpinscher’s hair should be brushed and combed twice a week. The head hair is usually brushed forward and then a V-shape is cut to expose the eyes.

Their hair is slow-growing so trimming is only needed infrequently.

Affenpinschers are well suited to apartment living but they are still moderately active. Playing with toys can make up a large portion of their exercise. Nevertheless, a daily walk is recommended. This gives them an opportunity to socialize with humans and other dogs.

Despite their independent spirit, Affenpinschers are eager to please and make great companions.

Short training sessions are recommended, and they be taught learn basic obedience.