The Miniature Schnauzer is ranked by the American Kennel Club as the 17th most popular dog in the United States. It is in 12th position on the list of intelligent dogs. They have huge personalities and can keep you entertained for hours. Like most breeds with big personalities he tends to think he is the leader of […]

The Havanese dog is the national dog of Cuba. It was developed from the “little white dog of Havana” which is now extinct. The little white dog of Cuba was descended from a Bichon-type dog from Tenerife. This is an ancestry it shares with other dogs of the Bichon group of breeds. It is ranked 23rd in the […] There are 2 varieties of Chinese Crested Dog – the hairless and the powder puff. Apart from the obvious difference between the two, they are completely alike in every other respect. In 2018, they were ranked 79th in the American Kennel Club’s list of most popular dog breeds. They make excellent companion dogs and once they […]

The Bolognese is a small dog of the Bichon type sometimes known as the Bichon Bolognese.  They are a companion dog which builds strong bonds to the person they spend most time with. They’re an easy-going dog which loves people. They are a fairly rare breed and don’t appear in the American Kennel Club’s list of […] The Coton De Tulear, which was developed in Madagascar, is a member of the Bichon group of breeds. The Bichons are a loosely related group – all descending from a common ancestor. The exact family tree is not fully known. The word Bichon is of French origin and shares an etymology with the word bitch. The breeds are […]

Are Any Dogs Really Hypoallergenic? Hypoallergenic is a fairly new word. It was first recorded in a dictionary between 1950 and 1955. It means to reduce or minimize the possibility of an allergic response. The term was used in the  cosmetic industry and it was used in the context of products containing few or no irritating substances. In recent times it […] Although the breed name is French, it is believed that the modern Bichon Frise descended from similar dogs that were present in Spain as early as the 14th century. At around this time, Spanish sailors may have introduced the dog to the Canary Islands. Over the years, their popularity waxed and waned. The first Bichon Frise arrived […] 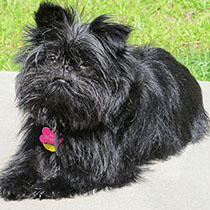 The Affenpinscher originated in Germany and its name can be translated into English as “monkey terrier”. In France it is described as the “little devil with a moustache”. It is now quite a rare breed. The American Kennel Club classify it in the toy group and rank it 149 out of 193 in breed popularity. They […] The Shih Tzu is a brachycephalic breed (which means its face is squashed up – It literally means short skull). This means that to be a Shih Tzu owner, you may need to put up with some snoring. They are susceptible to the breathing problems which affect all brachycephalic dogs. They have been bred as companion dogs […]

The Toy Poodle is part of the Poodle group which is recognised by the American Kennel Club. The other members of the group are the Standard Poodle and the Miniature Poodle. Poodles are classified as the second most intelligent dog breed after the Border Collie. Toy Poodles classified as part of the toy group by the […]