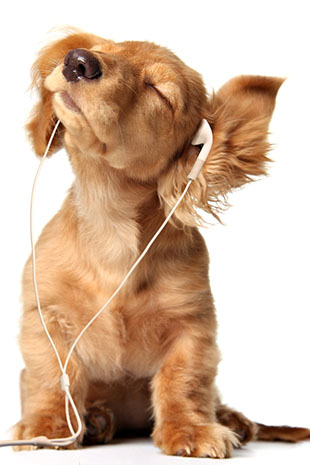 The answer to this question, as with so many others is yes and no. In humans, there is a wide variety of musical tastes. Different music is used on different occasions and different genres of music can evoke different emotions. Most humans with normal hearing can distinguish between the various notes of a musical scale. However, we may be the only mammals able to do this. Bats are more sensitive to changes in pitch than humans. But this ability is matched by no other mammal.

Is Playing Music Beneficial For Dogs?

Although dogs don't have the ability to appreciate music in quite the way we do, there is some evidence that dogs do find certain genres of music relaxing. There is a phenomenon known as species-specific music. All this term really means is that animals are more likely to enjoy tones that are familiar to them (similar to their own vocal range). Charles Snowden, an animal psychologist at the university of Wisconsin-Madison discovered that animals like completely different sounds to us. He found that humans prefer music that has a tempo very similar to their own heart rate. The researchers found that tamarin monkeys responded to music that had a beat similar to their heart rate and at a pitch about 3 octaves above our preferred range. So, while this was still music - it is not music that we would respond to very well.

Snowden and a cellist named David Teie later moved on to composing music for cats.

Composing for dogs is a bit more difficult. This is because dogs vary so much in size. This size variation also means a variation in heart rates and vocal pitch.

Some larger dogs have vocal ranges similar to that of an adult male human. This may mean that larger dogs like human music more than smaller dogs.

Deborah Wells, who is a psychologist at Queens University Belfast has found that some dogs can tell the difference between various genres of human music. The researchers found the dogs were more relaxed when they were listening to classical music. They seemed to become agitated when they were played heavy metal music.

What Music Should We Play For Our Dogs?

It's likely that most dogs will be totally indifferent to any music being played. However, some dogs will find it relaxing and there is some evidence that classical music of the baroque period is the best choice.

Try some experimentation. If you find some music that your dog seems to enjoy. Play some when you are going to be away from home for longer periods. It can't do any harm and may just help him get through a long lonely day.