Does Your Dog Have Lungworm?

Lungworms belong to the order Strongylida. They are a parasitic nematode which infests the lungs of vertebrates including dogs.

what is  LUNG-WORM infection in Dogs?

Dogs pick up lung-worm larvae by eating an animal that is already infected with the parasite or by drinking infected water. Dogs which spend time in woodlands or scrub are more likely to become infected.

The parasites are able to enter the bloodstream and migrate to the dog’s lungs and air passages.

Lung-worm infection is serious and is frequently fatal. And all dogs visiting local parks, woodland or other outdoor areas are at risk. Young dogs seem to be more likely to become infected.

Dogs infected with lung-worm can exhibit a number of symptoms. However, these symptoms can easily be confused with other illnesses. Some dogs don’t show any outward sign of infection. Respiratory issues such as coughing and labored breathing are often present. Other symptoms such as weight loss, vomiting and lethargy can also be indicators. If you have any concerns about your dog, you should consult a veterinarian. A conclusive diagnosis of a lung-worm infection is normally carried out by identifying the eggs of the parasite in the feces of the dog. They may also be found in the saliva or nasal discharge. Lung-worm in dogs can be caused by a number of different nematodes. Some are more difficult to detect than others. Your veterinarian may recommend a Baermann test. This test is designed to detect the larval stage rather than the egg stage of the parasite. It involves suspending the fecal matter in water inside a disposable hollow-stem wine glass. Over a period of hours, the larvae move from the feces to the water and sink in to the stem of the glass.

Other tests to determine whether a dog has a lung-worm infection include a, physical examination (lung auscultation) and chest X-rays, a complete blood count (CBC) and a tracheal wash.

The objective of treatment is to get rid of the lung-worm infection and this  is normally pretty straightforward. There are numerous drugs which can be used to eradicate the parasites, and these are typically administered over several weeks. Usually dogs go on to make a full recovery. In dogs which have been diagnosed later recovery can take longer

prevention of lung-worm in dogs

Dogs can sometimes eliminate the parasite through coughing or in their feces. Do not allow your dog to wander by himself. He will be more likely to find and consume carrion which could be infected. If he has an outside water bowl, clean it on a regular basis. 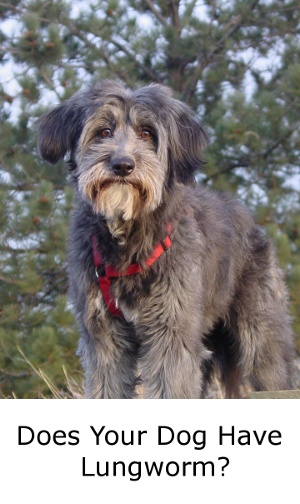