Any Dog Can Bite Dogs are everywhere. In the United States there are about 90 million pet dogs. Check the statistics here.

This is an increase from 68 million in 2000. Under the right circumstances, any of these dogs are capable of biting. Everyone should learn to keep themselves safe around dogs. Parents should be dog aware. it is natural for children to want to pet dogs and you should make  sure they do this as safely as possible.

Here are some things you can do to minimise your chances of being bitten by a dog.

Always ask the owners permission before you approach or touch an unfamiliar dog. if the  owner is not there, leave the dog alone.

When introducing yourself to an unfamiliar dog, let the dog approach you first. hold out your hand and let him sniff it before attempting to touch him. Crouching down or turning side on will lessen the chances of the dog seeing you as a threat.

Do not surprise a dog. Always let him see you approaching.

Do not approach a dog that is sleeping, eating or has puppies.

Never leave babies or young children alone with a dog.

If a dog has been injured do not approach it. Call a vet or an organisation equipped to deal with the situation.

When a dog is feeling threatened or uncomfortable it will exhibit certain signs which you should watch out for. Some of them are more obvious than others. Some of them are confusing - they are also used in other situations and can seem friendly.

These are some of the most common signs that a dog is feeling uncomfortable:

Raised fur on the back of the neck.

Dogs have a line of hair running down their back which is raised in response to outside stimuli. This is an involuntary action which is intended to make the dog look bigger. It is not always associated with aggression, but if you are near a strange dog, he is facing you and his hackles rise act cautiously.

Yawning or licking their lips

Yawning in dogs is a sign of stress. They may yawn when they are in a strange or uncomfortable environment such as the vet’s waiting room. While it is not an overt sign of aggression, you should definitely take note of the way the dog is feeling. Lip licking is a sign of appeasement of submission. It will be recognised by other dogs and you should learn to do the same.

Tail wagging in dogs is normally taken as a sign of welcome or friendliness. However, if the tail is held high and wagging slowly and the body is not moving this is a sign of uncertainty and possible impending aggression.

Seeing the Whites of Their Eyes.

You don’t see the whites of a dog’s eyes when he is happy. When you can see the whites, it is a clear sign that he is feeling threatened and could be about to bite.

A relaxed dog has a flexible body. When he is tense, his muscles will be tight. He will be standing four square, his ears will be pointing forward and his tail will be erect. He is very close to an attack.

This is really the final warning. The dog is very unhappy with what is going on around him and unless something changes, he will bite.

How many dog Bites are there in the US?

Every year in the United States there are more than four and a half million dog bites. Approximately one in five of these need medical attention.

Children are more likely to be bitten

Most dog bites occur in the home. Children are bitten more often than adults. Children spend a lot of time playing with their dogs and often see them as just another toy. They often ignore dog safety rules even when they are receiving constant instruction. Often, they don’t seem to realize the dog needs his personal space and they ignore the warning signs. Dogs don’t bite out of the blue but what seems to be acceptable to them one day may not be acceptable on another day.

It is difficult, but children need to be shown the safe way to treat a dog and how to recognize the warning signs,

What to do if attacked

Even if you do treat dogs appropriately, you may still find yourself in a situation where you are facing an aggressive dog.

The first rule is never run away. Dogs have a prey instinct and their normal reaction will be to chase you and possibly bite.

Do not panic. Stand still and wait for the dog to back away.

Do not move towards the dog.

Most people live their whole lives without being bitten by a dog. The vast majority of dog owners are never bitten. Following some simple rules will go a long way towards making you safe too. 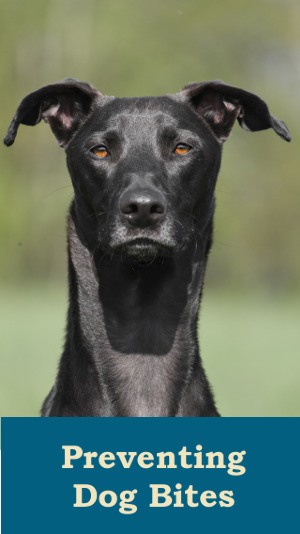