What Is A Designer Dog?

Designer dogs are a group of hybrids that have become popular in the last 30 years or so. The crosses have been used in an effort to get the best qualities of both breeds. The term designer dog was coined by the media.

They can be quite expensive. Remember there are thousand of mixed breed dogs sitting in shelters waiting for a home.

These are available for a small fee. Often, they have been trained and just need a family to love.

Before investigating any dog purchase, it is worth going to your local shelter to find out what is available. The Labradoodle is a cross between the Labrador Retriever and the Standard Poodle. An Australian breeder created this cross in an attempt to combine the gentleness and ease of training of the Labrador with the low shedding coat of the Poodle.

This was undertaken for the Royal Guide Dogs Association Of Victoria.

The Labradoodle was the first of the designer dogs first appearing in the 1980s.

There are 3 varieties of Labradoodle - miniature, medium and standard. It's a shaggy looking dog and its coat can be curly, fluffy or wiry. Because they are a cross breed, no two dogs look the same.

Labradoodles enjoy being part of a family. They are good with children and are energetic loyal companions. They mature fairly slowly and can be boisterous for the first 18 months of their lives. They will benefit from early training. The Cockapoo was one of the earlier designer dogs. It is a cross between the American Cocker Spaniel and the Standard Poodle. Some of the crosses are with the English cocker spaniel. these crosses are normally known as Spoodles.

Cockapoos are affectionate dogs which get on well with everyone. They were bred to get a hypoallergenic dog with a good temperament. Generally speaking, their temperament is considered to be more important than their appearance.

They love kids and get on well with other dogs. they are intelligent and easy to train. They adapt well to apartment living but do require regular exercise. 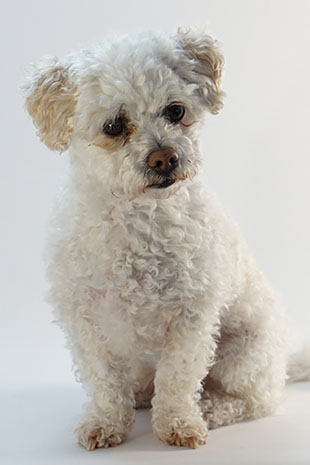 Maltipoos are a cross between a Maltese Terrier and a Poodle.

They are easy to train, they get on well with other dogs and fit into almost any type of family. They are a small dog with low grooming needs. They have medium energy levels and adapt well to apartment living.

They are good house-dogs and will alert you to everything that is going on. They do need training so that they don’t turn into nuisance barkers. The Goldendoodle is a hybrid dog resulting from a cross between a Golden Retriever and a Poodle. Goldendoodles are growing in popularity. They are good with kids and other dogs. They range in size from small to large depending on the size of their parents.

They are easy to train and have been used as guide dogs and sniffer dogs.

They have quite high energy levels and need regular intense exercise. They are not suited to apartment living and prefer a yard to run around in.

They were first developed in the 1990s but have gained considerable popularity since then,